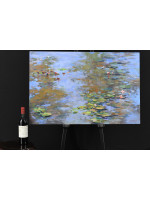 Limited edition by L.S. Lowry titled "The Lake" Number 18 from a 35 published edition worldwide. In special bespoke frame and mount. It is supplied with the signed certificate of authenticity (signed by the Master Printer) This limited edition is in mint condition. Note: supplied with insurance replacement valuation certificate for £1575 along with biographical details on the artist (free of charge). After his fathers death in 1932, Lowry cared for his "bed fast" mother until her death in 1939. His paintings from this period reflect the isolation and growing despair of these years. It is possible that his mental stress and depression percolated into the painting and in a way was the reason for its bleakness. The painting depicts a moody Irwell Valley and its smoke-polluted atmosphere against an industrial background. The fences look like blood-red coloured tombstones dotted around and the telegraph poles are reminiscent of crucifixes. The water in the middle ground looks dirty and stagnant with an abandoned half-sunken boat to the left. On the left shore there are men queuing for work at a time when jobs were few and far between. On the far left is Agecroft Colliery, which was opened in 1844 but had to close in 1932 with a great loss of jobs. Lowry has intertwined churches and the town hall with the mill chimneys, which spew out black polluting smoke; it is an interesting juxtaposition of industrial architecture and residential buildings.