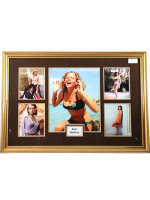 John Stephen Parrott, MBE is an English professional snooker player and television personality. He was a familiar face on the professional snooker circuit during the late 1980s and throughout the 1990s, and remained within the top 16 of the world rankings for fourteen consecutive seasons. He reached the final of the 1989 World Championship, where he lost 318 to Steve Davis, the heaviest defeat in a world championship final in modern times. He won the title two years later, defeating Jimmy White in the final of the 1991 World Championship. He repeated his win against White later the same year, to take the 1991 UK Championship title, becoming only the third player to win both championships in the same calendar year (after Steve Davis and Stephen Hendry); he is still one of only six players to have achieved this feat. Please Note: Supplied with authenticity certificate (free of charge)
Height 51 Width 66 Depth 1(ALL SIZES IN CENTIMETRES)