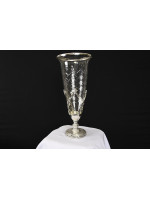 Rare item. Saturday Night Fever an official record industry award from the BPI (British Photographic institute) presented to Alan Kendal who accepted the award on behalf of the bee gees and the Robert Stigwood organisation who managed the group. Alan played guitar with The Bee Gees over a 30 year period. This award was presented in recognition of one million pounds of record sales of the 1978 sound track album from the movie. This was one of the fastest selling movie soundtrack albums of all time. Note: this item will be supplied with a certificate of authenticity (free of charge)
Height 51 Width 41 Depth 2(ALL SIZES IN CENTIMETRES)