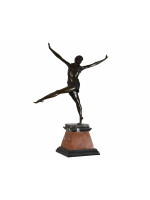 Bronze Dancer on Marble Base 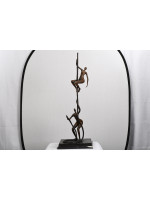 Framed Limited Edition "Cat Woman" by the renowned artist Joe Chierchio. This is one of only 50 published worldwide, number 2/50. Supplied with signed certificate of authenticity (signed by Joe Chierchio and the master printer) Framed with special bespoke frame and intricate mount. NOTE: Supplied with insurance replacement valuation for £1500 along with biographical details on the artist (Free of charge). The original and most widely known Catwoman, first appeared in Batman #1 (Spring 1940) in which she was known as The Cat. As an adversary of Batman, she was a whip-carrying burglar with a taste for high stake thefts. Though most modern iterations of the character are just as heroic as they are villainous, Catwoman is still commonly recognized as a villain by most viewers and fans, representing Batmans chief female nemesis. Nevertheless, Catwoman is still sometimes an ally to Batman and also is often his lover. I think women are stronger today than ever. They do it all, Chierchio believes, describing his inspiration for creating this colourful image of Catwoman