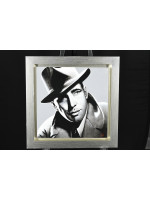 Nicknamed "The Whirlwind" because of his fluid, attacking style of play and popularly referred to as the "Peoples Champion", White is the 1980 World Amateur Champion, 2009 Six-red World champion, 3 time World Seniors Champion (2010, 2019, 2020), 2019 Seniors 6-Red World Champion and 1984 World Doubles champion with Alex Higgins. He reached six World Championship finals but never won the event; the closest he came was in 1994 when he lost in a final frame decider against Stephen Hendry. He is one of a select number of players to have made over 300 century breaks in professional competition. This presentation is a wonderful tribute to Jimmy, as it includes a hand signed photo. Please Note: Supplied with authenticity certificate (free of charge)
Height 43 Width 79 Depth 1(ALL SIZES IN CENTIMETRES)