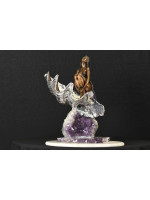 Bronze and Amethyst Lady in Shell 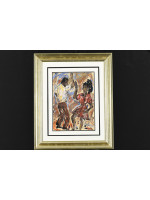 William Joseph Thorne, English professional snooker player. He won one ranking title, the 1985 Classic. He also reached the final of the 1985 UK Championship, losing 1614 to Steve Davis after leading 138. He was noted for his break-building, and was among the first players to compile 100 century breaks. He earned the nickname "Mr Maximum" and is also best remembered as being life-long friends with Gary Lineker (England international footballer). This is a lovely tribute to a true gentleman of snooker. Included is a personally autographed photo. Please Note: Supplied with authenticity certificate (free of charge)
Height 51 Width 66 Depth 1(ALL SIZES IN CENTIMETRES)